BimlFlex includes an Orchestration engine that controls failure scenario management, auditing and logging of runs. All Orchestration data is stored in the BimlCatalog database.

Batch Orchestration is controlled per Batch in the Batches metadata sheet.

The Orchestration Framework enables packages to maintain process and data integrity in case of an error condition. If a Package or Batch fail the Orchestration manages what runs in the next sequence and can, optionally, handle rollback of inconsistent data.

Every package is broken up into the following three main segments

The start sequence container holds the OnPreExecute event handler that controls the Orchestration path. The diagram below illustrates the event handler logic. 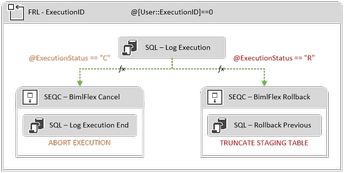 The following Stored Procedure is executed by the Start Event

Log successful execution of the package and set the next run status to ‘P’ for process. The following Stored Procedure is executed by the End Event

Every package, including batches, has an OnError event handler configured. This is illustrated above as number 5 [OnError]

The Orcestration passes the ExecutionID, a Boolean, that identifies if the package is a batch or a child package as well as the error code and description.

Logs the start of execution. Checks the results of the previous execution before proceeding.

Logs error condition and status as well as error code and description.

Where the logged execution id matches that of the successful package the ExecutionStatus will be set to S for success and the NextLoadStatus (the status that controls the actions of the next execution) is set to P for process.

This means that the package is ready for a normal run on the following execution and doesn’t need to perform a rollback.

If all of the child packages in this batch successfully execute the result is similar to the success of an individual child package. After the main package sequence container, "SEQC - BimlFlex Package End" will be invoked, this, in turn, executes the Execute SQL task "SQL - Log Execution End", setting the S and P for the ExecutionStatus and NextLoadStatus

When the package is restarted the OnPreExecute event in the starting sequence container "SEQC - BimlFlex Package Start" will handle Orchestration. If rollback is enabled, the data from the previously failed execution of the package will be managed depending on what integration stage the package is used in.

Batch level failures manages Orchestration and rollback for entire load across all packages in the batch.

Batch package failures trigger the OnError event handler that run the execute SQL task "SQL - Log Execution Error". This time the parameter @IsBatch will be true. Within [ssis].[LogExecutionError] there will be a conditional check made on @IsBatch, where if it is true we will update the execution table to make the NextLoadStatus to be R for all packages of the same ExecutionID, prompting all packages in that batch to rollback on their next execution.

Any configuration values associated with the failed ExecutionID are reverted to their previous values.

Rollback will remove partially loaded rows from the target tables. Depending on what integration stage the package are used in will determine what kind of roll back technique will be used.

The following illustrates the Orchestration of a main load sequence 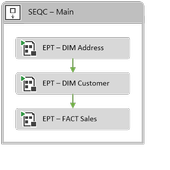 An error condition in the second run will generate the following Status Flag updates for the run.

In the above scenario, when the Batch is executed again, it will skip DIM Address and Rollback DIM Customer if the rollback process has been enabled.

Process management for failed loads and data integrity checks is an architecture and process decision.

The rollback function is controlled per layer in the Configurations and all are disabled by default.